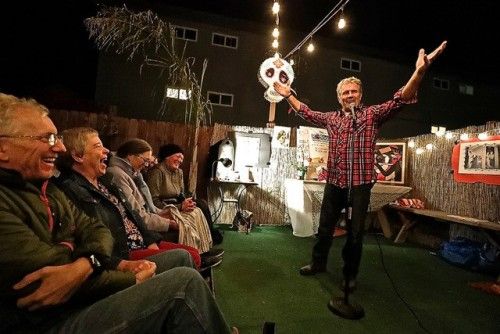 Rick headlining at the Storyteller Reboot in Morro Bay

Rick grew up around people who could tell stories, the kind of stories that would get told over and over because, like good cheese, the stories got better with age. Back in high school he would hang out at his friend Marty Ward's house listening to Marty’s dad, PW (Paul Ward), and all his buddies tell stories about working at the meat packing plant, fishing in Arkansas, or water skiing on the Illinois River. Sitting around PW’s kitchen table was like a master class in storytelling.  Rick didn’t know it at the time, but he was learning a skill that would shape his creative mind as a writer and performer.

Years later in L.A. during a lull in his acting career (it happens to all actors), Rick was complaining about not having enough work.  His wife, Laura, said, “You tell stories all the time. Why don’t you write them down and perform them?”   And guess what? She was right.  Rick started writing, and before long he had enough material for a one man show, based on his days growing up on a pig farm in Central, IL., called PIGBOY. It turns out that not only did Rick learn storytelling back home, but he quickly realized that the people he grew up with could be the colorful characters in his stories. They ranged from his high school wrestling coach, to his grandfather as a Baptist minister, to the man who drives the dead animal truck.

“These are real people and actual stories from growing up in a small farming community,” Rick said. “My mom is one of my best sources of material. I’m not sure you can call what I do writing.  Sometimes I’m just transcribing things that people have said, and then organizing them into the story.”

PIGBOY enjoyed successful runs in L.A., Chicago, and across the Midwest. It was chosen for the HBO Comedy Arts Festival in Aspen, where the New York Times described his performance as “spellbinding.” Rick’s stories are universal, so they play in many different venues from churches to bars to corporate events.

Rick has recorded a CD of several of his stories and turned one of them, “Slice of Pie”, into a short film, which he shot in the town where he grew up. The movie has had a successful run of the film festival circuit, winning numerous awards. Rick is still writing and performing his stories and is currently working on adapting more of them for film.

For more information about Rick's storytelling or to book him for an event send an email.

This Much Is True

As soon as I get back to Chicago I get to do this show. Yep, after 2+ years, This Much Is True will be returning home to Mrs. Murphy & Sons in April for an evening of storytelling. It's FREE. Doors open at 7PM.

This will be one of my last shows in So. Ca. before moving to the Midwest. I'll share the stage with some fine storytellers; Vicki Juditz, Katy Duft, and Ron Hart.

I will be joining five great LA storytellers with Beverly Mickins as the emcee. It's a live, in-person show, people. be there. I will.

Send me an email